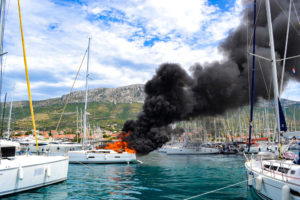 On Friday, August 19, a huge fire ripped through the historic and family-owned Mattapoisett Boatyard in southern Massachusetts, a short distance south of MWL’s Boston office. The fire destroyed five buildings, three dozen cars, and countless expensive boats. Continuous explosions and fuel from the boats left the property a complete loss, making subrogation efforts difficult for the countless insurers who will be called on to make good on the property losses and repair the marina. And there will be subrogation. Mattapoisett Fire Chief Andrew Murray and State Fire Marshal Peter Ostroskey has told us that the fire was most likely caused by the ignition of gasoline vapors during the replacement of a boat’s gas tank.

Recovery of the damages for the expensive boats stored at the boatyard might not be that simple, however. The biggest obstacle we come across when subrogating large marina fires isn’t the difficulty of sifting through tons of ash and debris to find a “smoking gun” and a cause—it’s the storage agreement the boat owner signed years ago and has long since forgotten. These storage agreements usually contain a completely self-serving and one-sided clauses which reads:

The storage provided by this agreement shall be solely at Owner’s risk and Owner hereby releases Marina of all liability for any loss or damage to the Boat and any other property of Owner whatsoever, whether or not such loss or damage shall have been caused by the fault or negligence of Marina or any of Marina’s employees, agents, licensees or invitees.

A claim for subrogation against a marina for a loss occurring while on marina property is often met with a denial letter because most marina agreements contain an exculpatory clause much like the one above. Sadly, far too many subrogation journeys end at this point when they should just be beginning. Wet slip, mooring, and dry rack storage agreements are often governed by federal maritime law instead of anti-subrogation state law. Am. E. Dev. Corp. v. Everglades Marina, Inc., 608 F.2d 123 (5th Cir. 1979). Admiralty jurisdiction and maritime law applies when a “potential hazard to maritime commerce arises out of activity that bears a substantial relationship to traditional maritime activity.” Sisson v. Ruby, 497 U.S. 358, 362, 110 S. Ct. 2892, 2895-96, 111 L. Ed. 2d 292 (1990). A fire or damage that occurs at a marina located on a navigable waterway has the potential to disrupt maritime commerce, so federal maritime law would apply. Id. As a result, both state and federal courts will often be required to apply the federal maritime law when interpreting a marina storage agreement, no matter where the yacht is located in the marina. Depending on the jurisdiction, the application of maritime law might just be what the subrogation professional needs in order to find the exculpatory clause unenforceable.

There are three primary claims a subrogated insurance carrier can bring against a marina, including breach of contract, breach of bailment, and negligence. Under the laws of many states, all three causes of action can often be defeated with an appropriately drafted and enforceable exculpatory clause contained within a marina storage agreement. However, by utilizing maritime law instead of state law, the catastrophic subrogation-destroying effect of the agreement can often be sidestepped. Knowing when this is the case is the key to successful subrogation. 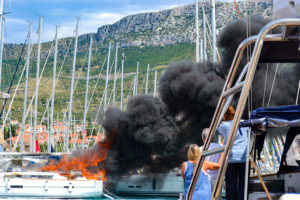 In the 8th Circuit, subrogation is going to be more difficult where there is an exculpatory clause. For an exculpatory agreement to be enforced, both parties must have equal bargaining power. In one instance, the 8th Circuit held that an exculpatory clause that absolved a marina from liability for its own negligence was enforceable only if the parties’ intent to do so was clear and the clause was not the result of overreaching. Sander v. Alexander Richardson Investments, 334 F.3d 712, 719 (8th Cir. 2003). With regard to overreaching, the Court stated “[i]t is not enough to assert that one party was less sophisticated than the other. There must be some evidence that the party holding the superior bargaining power exerted that power in overreaching the less sophisticated party by, for example, engaging in fraud or coercion or by insisting on an unconscionable clause.” Sander v. Alexander Richardson Investments, 334 F.3d 712, 720 (8th Cir. 2003). The facts before the Court in Sanders were devoid of any overreaching, and the Court made note that having the ability to go to other marinas in the area may show that there was no overreaching since the boat owners could have gone elsewhere if they did not like the terms of their storage agreement. Id.

Marina storage agreements also often require the boat owner to waive his or her insurer’s right of subrogation for losses occurring as a result of the marina’s negligence. Such clauses are generally enforceable, provided the intent to shift the risk of loss to the owner’s carrier is express and unequivocal. Quite often, this clause standing alone will not be enough to waive the carrier’s subrogation interests, unless the carrier itself consents to the clause under the terms of its policy or an endorsement thereto.

A marina will also frequently require the owner, through the terms of storage agreement, to add the marina to the individual boat owner’s policy as an additional insured. In addition to lowering the premium of the marina’s insurance, claims paid due to the marina’s negligence would then become part of the boat owner’s claims history, rather than the marina’s. In summary, when attempting to subrogate against a marina is met with an agreement containing an exculpatory clause, be sure to go the extra step to determine whether there are any ways around it.

Exculpatory clauses and waiver of subrogation agreements in contracts are the nemesis of subrogation. Knowing whether and when such agreements are effective to destroy the valuable subrogation rights of an insurance carrier is vital to effective subrogation of all stripes. I was interviewed in a New York Times article a few years ago which focused on the surprising effect that these risk-limiting agreements can have on possible third-party tort liability. The article came about as a result of a chart we created last year, entitled “Exculpatory Agreements and Liability Waivers In All 50 States,” which can be found on the MWL website. The chart is regularly consulted by lawyers, judges, and the insurance industry as a whole.

Please contact Lee Wickert at [email protected] if you have any questions about exculpatory clauses or marina boat storage subrogation.