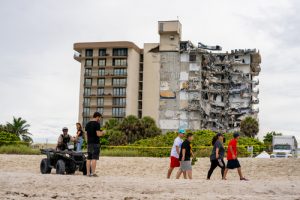 There are over a dozen people dead and 147 others remain unaccounted for. It is a human tragedy of unspeakable proportion and our prayers go out to all the families whose lives have been shattered by this tragic event. In many ways, nothing matters more than those families. Still, the collapse of the Champlain Towers South Condominium in the small, beachside town of Surfside, Florida, a scant six miles north of busy Miami Beach, is on the minds and radars of insurance and subrogation professionals. Like subrogation potential following the attacks on 9/11, precisely when it is appropriate to begin talking about and preparing for the inexorable business of sorting out liability and insurance claims is a touchy thing. However, as our clients know, time waits for no one and the hard work of determining who will bear the financial burden of this tragedy falls to the ranks of tireless subrogation soldiers who must begin the process of uncovering the truth. Buildings just do not collapse for no reason.

As MWL begins its relentless march to subrogation truth on behalf of its clients with regard to the condominium collapse during the pre-dawn hours of June 24, we do so quietly. Uncovering ownership records, leases, repair records, engineering reports, and other documentation illuminating what might have caused this tragedy is something that will initially be done in tandem with law enforcement and government officials. Subrogation efforts will not impede or affect the largest U.S. rescue operation since 9/11, and will progress invisible to the firefighters, search dogs, and emergency crews working around the clock. Nonetheless, we must move forward.

Around 1:30 a.m. on June 24, survivors tell us that they were awoken by fire alarms, falling debris, and the feeling of the ground trembling. The 136-unit Champlain Towers South building located at 8777 Collins Ave., was erected by a group of developers in 1981. It was the first project to be built in Surfside following a 1970’s moratorium on development necessitated by degrading water and sewer systems. The developers paid the city $200,000 to cover half of the cost of a new sewer system. In 2018, a structural engineering report on the Champlain Towers South building warned about many structural deficiencies in the building’s construction and “major structural damage” to the foundation. The report recommended “extensive repairs” were needed in the near future. The report by Morabito Consultants warned specifically about water being retained over the slab due to it not being on the proper slope. Water was accumulating and the engineering report said that failure to repair it could result in concrete deterioration. In addition, the engineers found “abundant cracking” in beams which were not fixed despite previous repair efforts.

In November 2018, a Surfside official reassured residents that the condition of the building was good and that it was safe. On the 15th of that month, a building official for the city appeared at an association meeting stating, “It appears the building is in very good shape.”

In April 2020, a letter (see HERE) was sent to residents of the building by the president of the condo board of directors. The letter advised that the condition of the building had worsened considerably since the Marabito inspection two years prior. A special assessment was proposed to help repair the building, and the president advised that “A lot of this work could have been done or planned for in years gone by. But this is where we are now.” Fast forward another 14 months, and the building collapsed.

In Florida, state law provides a civil cause of action to those who are damaged (including subrogated carriers) as a result of a person’s violation of the Florida Building Code. As a result of the frequency of faulty construction in Florida, the legislature passed Chapter 558 known as the Florida Construction Defect Statute. It defines construction defects to include deficiencies in design, materials, construction, observation of construction, surveying, planning, repair alteration, supervision, remodeling, and building code violations. A claimant must file a 558 Notice of Claim outlining defects and demanding an inspection of the building, before any lawsuit can be filed. The statute of limitations prohibits construction defect claims four years after the claim accrues. However, claims involving latent defects do not accrue until the defect is discovered or should have been discovered.

Available liability insurance is almost certain to become an issue in a loss of this magnitude. If you have losses or damages flowing from the collapse of the Surfside condominium building, please contact Elizabeth Hernandez at [email protected].