There is an ongoing and heated national debate over the growing practice of law enforcement using red light traffic cameras. More than 500 cities and other municipalities across the country have installed some form of red light camera systems to capture evidence of accidents and red light violations. Hundreds of others are either contemplating their usage or widening existing programs. According to the Insurance Institute for Highway Safety, 22% of all traffic accidents in the U.S. are caused by drivers running red lights. Red light intersection accidents result in over 800 deaths and over $7 billion in property damage, medical bills, lost productivity, and insurance premium increases annually. It would seem that anything society can do to cut down on these losses or place the onus for them on the parties actually responsible would be uncontroversial. That isn’t the case, however. Across the country, the use of these cameras as an aid to law enforcement is coming under strong attack, and legislatures are mobilizing to end these programs. Some are even calling the practice unconstitutional.

707.020. PHOTOGRAPHIC TRAFFIC SIGNAL ENFORCEMENT SYSTEM PROHIBITED. (a) Notwithstanding any other law, a local authority may not implement or operate a photographic traffic signal enforcement system with respect to a highway or street under the jurisdiction of the authority. (b) The attorney general shall enforce this section.

707.021. USE OF EVIDENCE FROM PHOTOGRAPHIC TRAFFIC SIGNAL ENFORCEMENT SYSTEM PROHIBITED. Notwithstanding any other law, a local authority may not issue a civil or criminal charge or citation for an offense or violation based on a recorded image produced by a photographic traffic signal enforcement system.

The new law, which went into effect on June 2, 2019, doesn’t necessarily mean all red light cameras will go away immediately. A few Texas cities with cameras already have contracts in place and could be allowed to operate them until their contracts expire.

Red light cameras are devices mounted on traffic stop light poles and cross-members which automatically collect video evidence on intersection collisions and red light violations. Red light camera systems utilize sophisticated technology, but they ultimately consist of a simple system comprised of one or more cameras, one or more triggers, and a computer. They are usually mounted at the corners of an intersection and on poles which provide a good view of the intersection. They capture all vehicles passing through the intersection and from different directions and different angles. Some use film, but most are digital.

Red light camera programs are instituted both via state and local laws. Texas originally legalized the use of red light cameras by law enforcement in 2007 when it passed Texas Transportation Code § 707.003. It allowed local governments to privately contract for the administration and enforcement of the system. Two years later, the city of Willis, Texas enacted Ordinance No. 09-0721A, which provided that a driver photographed running a red light is liable for a civil penalty of $75. The notice of violation is mailed to the vehicle owner at the address indicated on the state’s registration records not later than 30 days after the violation and it must contain:

From a law enforcement and public safety perspective, red light cameras allow law enforcement to easily issue a ticket to violators. From a legal perspective, they provide a valuable and, in some cases, the only source of evidence in a type of accident in which almost universally, both parties claim they had the green light. Just as the proverbial intersection swearing match case was starting to become a thing of the past, efforts are underway to outlaw and remove these cameras.

The debate over red light cameras has trickled down to even the basic assumption that they are effective tools for public safety. Republican Texas State Senator Bob Hall, one of the sponsors of the new Texas legislation, claims that cameras don’t improve public safety.

A 2012 audit in St. Petersburg showed the number of dangerous side-impact collisions did decrease at intersections where the red light cameras had been installed. Studies in Oxnard, California and Fairfax, Virginia reveal reductions in red light violation rates of about 40% after the introduction of these systems. However, data shows that rear-end collisions actually increased at these intersections, as more drivers stopped short to avoid violations.

Red light and speeding cameras are tools Wisconsin lawmakers say could help curb reckless driving in Milwaukee. Right now, there’s a ban on cameras in the state. Lawmakers want to change that and implement cameras across Milwaukee, but would they be effective in the city?

The objective of red light cameras is to improve intersection safety. Fines collected through red light camera violations are used to pay for the installation, operation, administration and maintenance of the photographic enforcement system. Camera equipment costs vary based on the type of camera, the complexity of the intersection, and technical requirements. A red light camera system installation can cost more than $100,000. A portion of the revenue from the installation over and above costs is required to be directed to the regional trauma account and local traffic safety programs.

The city of Chicago paid Northwestern University to conduct a study on their red light camera program. The study revealed that adding cameras improved driving behavior across the city, stating, “Now that the drivers are aware of these cameras they become more cautious when they drive at other intersections where there may not be cameras.” Based on the reduction of right-angle crashes revealed by the study, Chicago increased the “grace period” for running a red light from one-tenth to three-tenths of a second and relocated several cameras. On the other hand, a more recent study from Case Western Reserve University found that red light cameras failed to increase traffic safety.

Fines for running red lights generally run around $100, with California having the nation’s highest red light fine at $490 per violation. Florida drivers who were caught by red light cameras paid more than $100 million in traffic fines last year. But whether the cameras made Florida’s roads safer, or just swelled state and city coffers, is an open question. Chicago has made an estimated $600 million in red light camera fines since 2004, generating over $54 million in revenue in 2017 in this city alone. Much of this revenue is redirected toward the cost of implementing and maintaining these programs and equipment.

The constitutionality argument posits that these laws and programs somehow reverse the presumption of innocence and deprive drivers of the fundamental right to confront their accusers. A 2013 New York Supreme Court decision held that that red light camera laws which imposed monetary liability on vehicle owners that ran red lights were constitutional. Krieger v. City of Rochester, 978 N.Y.S.2d 588 (Sup. Ct. 2013). The court ruled that in order to find a statute authorizing such a program unconstitutional as violation of due process, one must overcome the exceedingly strong presumption of constitutionality and prove beyond a reasonable doubt that a contested law does not have a rational relationship to a legitimate government interest.

The Florida Court of Appeals announced in 2014 that the city of Hollywood improperly outsourced its statutory obligation to issue uniform traffic citations for red light camera violations to a for-profit vendor. City of Hollywood v. Arem, 154 So.3d 359 (Fla. Dist. Ct. App. 2014). However, in 2018, that decision was criticized and disapproved of by the Florida Supreme Court. Jimenez v. State, 246 So.3d 219 (Fla. 2018), the high court held that the Florida statute on red-light cameras authorizes a local government to contract with a private third-party vendor to review and sort information from the camera.

Chicago has one of the largest systems of red light cameras in the country, and in 2017, approved a settlement of nearly $40 million paid to nearly 400,000 drivers after a previous class-action alleged that the program had violated 1.2 million motorists’ due process rights because of unfair ticket notice practices. The key in that case was that the city was ignoring its own ordinances and rules by failing to give violators a “second notice of violation” before guilt can be determined. Late-paid fines were often doubled, far in excess of what was allowed by law.

On September 17, 2018, a group of drivers filed a class-action arguing that Chicago’s red light camera system failed to satisfy a number of state law requirements. Both city ordinances and state statute required notices to violators to contain certain information including an affirmation of evidence of the violation and a warning that not responding is an admission of guilt. The suit claimed the program constitutes an “unconstitutional” and “unlawful” violation of state law and is asking for injunctive relief preventing the enforcement of any future red light camera violation notices.

Running a red light has even become political, with some factions arguing they target certain demographics more than others.

While most of the attacks on red light camera systems focus on their use as an aid to law enforcement, their use is invaluable when it comes to litigation involving intersection collisions.

The success or failure of litigation (including subrogation cases) involving significant property damage, serious injury, and even death, often depends on the availability of evidence other than the “swearing match” statements of two parties who both claim to have had a green light.

As you might imagine, most intersection accidents involving the running of a red light will engage the aforementioned triggers and are likely to produce photographic evidence which can prove one party to the accident a victim and the other a liar. It is like Christmas for trial lawyers.

However, subrogating automobile insurers and their subrogation counsel utilize red light camera evidence to prove the un-provable: who did what in an intersection collision.

An article by Gary Wickert on the use of red light camera evidence in subrogation litigation and how long this photographic evidence is generally retained by municipalities can be found HERE. Even if consumer advocates have a problem with their use in charging drivers with moving violations, their incredible importance in helping seriously injured drivers prove who was responsible for causing their injuries or helping subrogated insurance companies placing the burden for a significant loss on the shoulders of the party truly responsible for causing the loss, should not be underestimated or overlooked. 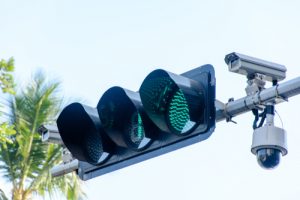 In 2012, 540 cities were operating red light camera programs. Today, only 421 cities are doing so. Municipalities that have dropped their programs cite a number of issues in making their decision, including whether the programs encourage safe driving and deter running red lights, difficulties in and/or challenges to enforcing violations, and ticket notification problems. The decline of these programs is also attributable to rising costs of maintaining them, decreasing revenues, and community opposition. Intersection accidents represent a percentage of vehicle crashes and, therefore, a disproportionate share of litigated cases. Credible witnesses are the key to winning cases, but credible witnesses are rare, can be cross-examined, and are often reluctant to cooperate. The growing ubiquitous presence of red light cameras and traffic surveillance are beginning to serve as rock-solid witnesses in these often-tragic incidents—witnesses who won’t recant, move to Mexico, or crater on the witness stand. Even the most agnostic juries tend to believe their own eyes.

Despite recent attacks on these programs, a recent national survey conducted by Public Opinion Strategies reveals that nearly 70% of law-abiding citizens support the use of red light cameras at the most dangerous intersections in their states. Only 29% oppose them.

The argument against red light cameras is that they offer little in the way of public safety, and primarily serve as reliable revenue sources for local officials. Consumer advocates argue that municipalities should discontinue their red light camera programs, which have for too long “burdened” motorists – without making them safer. This argument makes little sense when you consider that the only motorists who are truly “burdened” are those whose lives and families are shattered by those who can’t obey a simple red traffic light.

If you have any questions regarding Texas auto insurance subrogation and/or litigation, contact Lee Wickert at [email protected].