Sitting In Judgment Of The Proper Spelling: “Judgement” Or “Judgment”? 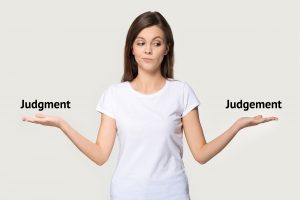 The English language is a fascinating subject with a history as rich as it is confusing. It is spoken by nearly 1 billion people worldwide, making it the second most-spoken language, with only Mandarin (1.2 billion) surpassing it. It is the official language of nearly 100 countries, not including the United States, which doesn’t have an “official language.” It is continually expanding, with over 4,000 new words added to the dictionary every day. America is one of the most linguistically-diverse countries in the world, which explains why we have a lot of confusion about how certain words are pronounced or spelled.

If someone learns English in India, they will be taught the British spelling of these words. If learning in America, they will learn the American version. Many of these differences resulted from a time when spelling standards had not yet been developed. When Samuel Johnson’s “A Dictionary of the English Language” was published in 1755, a “British standard” began to appear. An “American standard” similarly developed with the publication of Noah Webster’s “An American Dictionary of the English Language.” Webster tried to establish spelling reforms and standards, which fueled the difference between so many English and British spellings. His reforms were effective in America but were not received well in Britain.

The word “judgment” is also one that has a different spelling in America than it has in England. The British retained the extra “e”, while America disposed of it. Therefore, the traditionally-accepted correct American spelling is “judgment”, while the British still accept and use the spelling “judgement.” But that isn’t the end of the story.

While “judgement” with the extra “e” has had its ups and downs in popularity within Britain lay society, “judgment” remains the preferred spelling in British courts and legal proceedings. That professional difference has bled into to U.S. usage (“useage” in Britain). Most lawyers and courts spell it “judgment”, while the spelling “judgement” is found in many prominent places, including the New York Times. It appears without the extra “e” in most printed works, but the double “e” judgement can be found throughout society. Conversely, when the renowned British lexicographer H. W. Fowler was writing his book on word usage, the single-e version of judgment was being used by a host of British writers. Fowler still prefers “judgement.”

In short, you can’t go wrong with “judgment.” Adding the extra “e” is a no-no in all U.S. legal proceedings and legal documents, and even runs afoul of U.S. dictionaries. However, the longer version is also accepted as standard in non-legal writing. Shakespeare used only one “e” in “The Merchant of Venice”, but used “judgement” in “First Folio.” I suppose if you’re not working within the legal profession, you can use your own judgement on the matter.