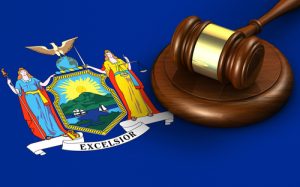 New York’s anti-subrogation rule (“ASR”) is found in common law and is not statutorily based. The anti-subrogation rule is a common-law doctrine crafted by the New York Court of Appeals “both to prevent the insurer from passing the incidence of loss to its own insured and to guard against the potential for conflict of interest that may affect the insurer’s incentive to provide a vigorous defense for its insured.” ACE Am. Ins. Co. v. Am. Guarantee & Liab. Ins. Co., 257 F. Supp.3d 596 (S.D.N.Y. 2017) (quoting N. Star Reins. Corp., 82 N.Y.2d at 294–95). The ASR primarily applies in circumstances where an insurer seeks to recover from its insured for “the same risk covered by its policy.” Arch Ins. Co. v. Harleysville Worcester Ins. Co., 56 F. Supp.3d 576 (S.D.N.Y. 2014) (quoting ELRAC, Inc., 96 N.Y.2d at 75) (emphasis in original). “The essential element of the anti-subrogation rule is that the party to which the insurer seeks to subrogate is covered by the relevant insurance policy.” Millennium Holdings LLC v. Glidden Co., 27 N.Y.3d 406 (2016). “Furthermore, the anti-subrogation rule bars claims not only against the individual or entity who is directly insured, but also to ‘additional insureds’ when there is an express indemnity agreement.” Liberty Mut. Fire Ins. Co. v. E.E. Cruz & Co., 475 F. Supp.2d 400 (S.D.N.Y. 2007) (quoting Allianz Ins. Co. v. Otero, 353 F. Supp.2d 415 (S.D.N.Y. 2004)).

In Allied World Surplus Lines (a/s/o Tappan Zee Constructors, LLC) v. Hoffman International, Inc., et al., 2020 WL 4925618 (S.D.N.Y. 2020), Allied filed a subrogation suit for damage to a crane and a bridge against three companies which were not insured by them, but which created a limited liability company which was insured by Allied. Allied argued that the three companies were not covered by the Allied insurance policy and, therefore, the ASR should not apply to prevent their subrogation action. The court held that the ASR did not apply, because even if these three companies were insured in some capacity under the Allied policy, the ASR might not bar the third-party action if they were insured for different risks than the LLC.

A chart that covers the anti-subrogation in all 50 states can be found HERE. If you should have any questions regarding this article, or subrogation in general, please contact Gary Wickert at [email protected].