Subrogating The Deer In The Headlights 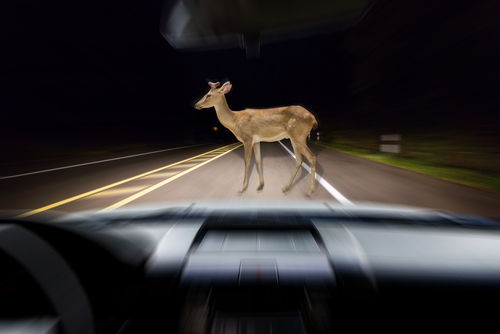 One day last month our firm received three separate, unrelated subrogation claim files involving serious personal injury, property damage, and a death resulting from tractor-trailers whose drivers had swerved to avoid colliding with a deer on the highway. In two of the losses, the 18-wheelers overturned and were shortly thereafter struck by other vehicles, resulting in further injuries and damages. The poor deer that started it all are still presumably alive, although uninsured. A passenger in one of the vehicles which struck the truck is dead.

The National Highway Safety Administration (NHSA) recently conducted a study that analyzed the ever-increasing danger of deer-related vehicle accidents. Such accidents have consistently risen over the years due to increasing deer populations and rising speed limits. There is a serious deer overpopulation problem in the United States thanks to deforestation (which actually helps the deer), limited hunting, and a lack of natural predators. In 1930, the white-tailed deer population stood stead at around 300,000. Today it exceeds 30 million, and not one of them obeys traffic signs or uses crosswalks.

There are over 1.5 million deer-related vehicle accidents every year, resulting in an average 10,000 serious injuries, 200 fatalities, and over $1 billion in property damage. The vast majority of these occur in the Midwest, especially in Wisconsin, Minnesota, Illinois, Iowa, Michigan, and Ohio. However, for the past 11 years, the state on top of State Farm’s list of the states with the highest likelihood of such crashes has been West Virginia—where the odds of striking a deer are an astonishing 1 in 41. Compare that with Hawai’i, where the odds are 1 in 6,823.

In many insurance claims involving deer collisions, the insured is struck by the swerving car or truck or it comes upon wreckage in the road which resulted from such a collision. Subrogating the vehicle which swerved to avoid the deer is often an after-thought, if a thought at all. However, aggressive subrogation professionals should remember that prudent drivers who react appropriately when confronted with a deer in the headlights can usually avoid the devastation and carnage that results from acting inappropriately.

When claims professionals receive claims involving deer collisions, they must take the time to investigate a few miles downstream of the crash  and look for Deer Crossing signs. Those signs are there for a reason and are placed in areas known for high deer traffic to warn motorists and truck drivers. Deer are most frequently hit during dusk and dawn. The real culprits in these collisions, however, are drivers who swerve to avoid hitting a deer. Swerving can result in vehicles moving into oncoming traffic, crashing into trees and other objects, or evening rolling over. The safest and most prudent course of action when faced with a deer in the headlights is to slow down as much as possible and let your vehicle strike the deer.

Hitting a deer can ruin your day. But it is nothing compared to the misery that could result if the driver swerves into a different lane or into oncoming traffic. While deer may cause damage to a vehicle and with smaller vehicles even injury, there is a much greater potential for serious injury and damage if the driver swerves and strikes a tree, telephone pole, or another vehicle. This is especially true if a tractor-trailer or commercial truck is involved. Experts advise drivers to take their foot off the gas and maintain a straight course to reduce damage and avoid injuring himself or others. The website dmv.org succinctly says, “It is best to lock the brakes, jam the horn, and (if time allows) duck low behind the dashboard.” The Wisconsin Department of Transportation says, “…the safest option is to hit the brakes and the deer…If you swerve suddenly, you can lose control and then you risk a more serious collision with another vehicle or a stationary object such as a tree or utility pole.” “Do not swerve” is the universal consensus regarding the prudent course of action to take when a deer appears in the roadway.

The Sudden Emergency Doctrine is a doctrine of tort law which states that a driver confronted with a sudden and unexpected perilous situation not of his or her own making and who acts as would a reasonably prudent person under the circumstances will not be held liable even if later reflection shows that the wisest course was not chosen. This defense will likely be used by a driver who swerves to avoid a deer and causes other serious damage, injury, or death. However, evidence that the overwhelming consensus is that the prudent action is to not swerve can help sway a jury and a third-party liability adjuster and convince them that the actions of the defendant driver were not the actions a reasonably prudent person would have taken. Facing this defense is better than no subrogation potential at all. In North Carolina, for example, the  defense requires the driver to be “suddenly and unexpectedly confronted with imminent danger to himself or others.” If you get a statement that indicates that the driver swerved to avoid harming the poor deer, the defense might not be applicable. By comparison, the defense would never be available to a driver who swerved to avoid a squirrel. Therefore, simply by showing no appreciation for or consideration of danger to the driver you can negate the Sudden Emergency Doctrine. This is easy to do in collisions involving lower speeds. Remember, the Sudden Emergency Doctrine is only applicable when a collision or accident is shown to have occurred as the result of a sudden emergency not of a party’s own making. White v. Taylor Distribution Co., Inc., 753 N.W.2d 591 (Mich. 2008).

Drivers who do not see deer until the last minute are often not paying attention. Deer Crossing signs are installed at great expense and for a very important reason. Travelling at 75 MPH half a mile after passing such a sign is usually not the action of a reasonably prudent driver. Deer are most active at dawn and at dusk. They are extremely visible from July to September when alfalfa, soybean, and milo fields are mature, and food is plentiful. Sex sells, and during the rut—which usually begins on November 13 and lasts for 10 days—when breeding activity is at its highest, deer are everywhere. When investigating these accidents, pay attention to the skid marks. If they begin only a short distance from the point of losing control, the driver probably was not paying attention. An absence of skid marks indicates that the driver didn’t even try to stop.

When my father taught me to drive, he talked about the “big picture” and the need to decide how I would react to something happening in front of you before it ever happens. He stressed that I should always anticipate the unexpected. While that sounds a little like the unstoppable force hitting the immovable object, it will play well to jurors who feel the driver could or should have simply ran into the deer. Other factors which come into play include the type and size of vehicle being driven. There is little chance that a white-tailed deer will injure the driver of a tractor-trailer. What is the size of the animal? Smaller does and fawns may evoke fond memories of the Disney classic “Bambi”, but it doesn’t make it reasonable to endanger others around you to save the wildlife. PETA members will make good defendants.

If you have any questions regarding this article or on subrogation in general, please contact Gary Wickert at gwickert@mwl-law.com.