We have recently seen an uptick in cases where a tree has fallen on to a neighbor’s house, with calamitous results. Hurricane Ida will likely only increase such claims. As the first-party claim by the homeowner is processed, subrogation professionals are usually involved to determine if the owner of the tree was at fault and if there is a viable third-party subrogation claim. Typically, the knee-jerk defense to such a claim is a blanket denial based upon the Act of God Defense. Rarely is a tree so diseased or old that it simply falls completely of its own accord. More often, there is some wind event, such as a tornado or hurricane, which provides the last straw. When these circumstances occur, what can a subrogation professional do to combat the Act of God Defense?

The answer, quite literally, is in the past. In most states, the Act of God Defense can be overcome if the tree owner had prior knowledge of the risk. This can be actual notice (e.g., they are advised by local tree company to cut it down or portions of the tree have already fallen) or constructive notice (dangerous condition is obvious and existed for such a length of time that the owner should have known). In finding negligence, courts and juries will look at a variety of factors including the amount of time the condition existed, the size of the premises, the type of condition, and when a reasonable person would have discovered the condition. This is a highly factual inquiry, and there may not be a smoking gun. Unfortunately, it may not be enough that the tree in question was aged or that vague doubts were expressed as to the tree’s viability. The best tree subrogation cases are built on written evidence proving that the tree owner was on notice of the condition of the tree. For example, in one case that we handled successfully, a tree from a neighboring property fell on the insured’s home in New Orleans, Louisiana, during a hurricane. The liability insurer for the owner of the tree initially denied the claim. However, after investigation, it was determined that not only had the insured homeowner demanded the removal of the tree prior to the hurricane due to its weakened and diseased state, but she had even retained a lawyer to send a written demand to her neighbor to remove the tree. The neighbor had replied in writing, agreeing to obtain quotes to remove the tree. She obtained quotes, but found it was too expensive and failed to remove the tree in the eight months between the demand and the loss date.

In another case in South Carolina, limbs of the tree overhanging the insured homeowner’s property had previously fallen on the insured’s driveway. The insured orally complained to his neighbor, and the neighbor retained an arborist to assess the condition of the tree. The arborist did not comment on the condition of the tree in writing, but provided an estimate to remove the tree. The neighbor did not remove the tree because the estimate was too expensive for her. Several months later, the tree fell during a hurricane, almost completely destroying the insured’s residence. Although the tree owner claimed that the arborist had told her the tree did not need to be removed, the fact that the estimate provided for the removal of the tree, but she did not do it, was enough for her insurer to settle prior to the deposition of the arborist, for several hundred thousand dollars. 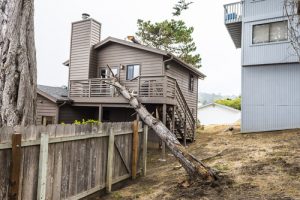 A plethora of evidence may exist to assist the subrogation professional in proving that the tree owner knew or should have known of the poor condition of the tree. Make sure to check with your insured to see if they have any texts or e-mails with the neighbor discussing the condition of the tree or demanding its removal. The insured may have pictures of the tree as it existed prior to the loss. Survey other neighbors whose property is near the same tree, to see if any limbs fell on their property or if they expressed any concerns to the tree owner. Contact any tree trimming companies or arborists who may have serviced the tree prior to the loss, to see if they had formed an opinion as to the condition of the tree and shared it with the tree owner. Is the tree on a servitude or utility right of way? If so, the utility company may have maintained the tree or severely pruned it, which may have weakened the tree or left it susceptible to disease. Utility companies often inspect trees that are near its utility lines and will recommend the removal of a diseased tree that could knock down power lines if it fell. A utility company worker may have even reported the poor condition of a tree to the tree owner. Is the tree near a county right of way? If so, then the county could have an abundance of information concerning the health of the tree. The county may have inspected the tree, or the property owner may have requested that the county remove the tree or otherwise expressed concern to the county as to the condition of the tree. Trees on property owned by state or local governments are usually maintained and inspected by the governmental entity, which may enjoy tort immunity depending on the law of that state.

Be sure to immediately retain a licensed arborist with forensic experience who can inspect the tree before it is removed from the insured’s property for signs of rot and disease. If the tree had already been removed, see if the insured took pictures of the tree that can be examined by an arborist to form an opinion. Quite often, merely based upon the pictures of the tree, an arborist can form an opinion that the tree owner should have known the tree was in poor condition due to signs of rot or decay on the exterior of the tree, dead or fallen branches, or signs of insect infestation.

Remember, the lack of funds to pay for removal of a diseased tree is not a defense to liability when the tree falls and destroys the neighbor’s home or other property. Certainly, the complete removal of a tree can be expensive: often $5,000 – $6,000 per tree. However, failing to remove a tree when one knows or should know the tree is a danger to a neighbor is, in essence, gambling with your neighbor’s property and perhaps life; something the law does not reward.

The nemesis of most insurance companies is the natural disaster. Hurricanes and floods have enough destructive potential to put many insurance companies out of business. With no obvious subrogation potential or third-party liability, these claim payments are seemingly money down the drain. However, tireless investigation, creativity, and research can reveal recovery potential in even the most tragic of 100-year storms. We have a recorded webinar entitled “Subrogating Against God” that focuses on how to investigate and ferret out third-party recovery potential where none seems to exist. Rainstorms, hurricanes, windstorms, tornados, and the like, have traditionally been chalked up as “Acts of God”. After Hurricane Katrina and Hurricane Ida, however, the nation is on notice to be prepared for the worst of the worst. If liability is there, this webinar may help you find it. To view this recorded webinar, at no cost, click HERE.

If you should have questions regarding this article or subrogation in general, please contact James Busenlener at [email protected].