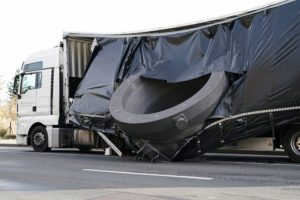 MWL sees more than its fair share of subrogation cases involving work-related injuries caused by shifting and falling cargo. If a truck’s cargo is not properly loaded or secured, the resulting workers’ compensation claims can be significant. We routinely see cases in which shifting cargo results in a trailer tipping over and a resulting tip over of the tractor resulting in injury or death. Even more common is the case in which shifted cargo falls and strikes a truck driver or dock worker when the trailer’s doors are opened. Cargo must be loaded and secured carefully and in conformity with federal regulations and trailer doors must be opened cautiously or employee can be injured or killed. Proving who was at fault can be challenging and prompt investigation must be a priority when a falling cargo case is received.

On September 27, 2002, the Federal Motor Carrier Safety Administration (FMCSA) promulgated extensive cargo securement rules which both revolutionized falling cargo cases and made them significantly more complex. All motor carriers operating in interstate commerce must comply with the new rules and regulations, and failure to do so will be considered negligence. The new rules represented a sea change in the way carriers use cargo securement devices to prevent cargo from shifting on or within or falling from commercial motor vehicles. They required a significant increase the number of tiedowns used to secure certain types of cargo. They apply to all cargo-carrying commercial motor vehicles (as defined in 49 CFR 390.5) operated in interstate commerce. The rules apply to all cargo, except certain commodities in bulk that lack structure or fixed shape (e.g., liquids, gases, grain, liquid concrete, sand, gravel, aggregates) and are transported in a tank, hopper, box, or similar device that forms part of the structure of a commercial motor vehicle.

Falling cargo cases which involve serious injury or death require the immediate retention of a qualified expert. Why? Because the performance criteria which underlies the FMCSA regulations concern themselves with the deceleration in the forward direction, and acceleration in the rearward and lateral directions, that cargo securement systems must withstand. According to the FMCSA website:

Deceleration is the rate at which the speed of the vehicle decreases when the brakes are applied, and acceleration is the rate at which the speed of the vehicle increases in the lateral direction or sideways (while the vehicle is turning), or in the rearward direction (when the vehicle is being driven in reverse and makes contact with a loading dock). Acceleration and deceleration values are commonly reported as a proportion of the acceleration due to gravity (g). This acceleration is about 9.8 meters/second/second (32.2 feet/second/second), which means that the velocity of an object dropped from a high elevation increases by approximately 9.8 meters/second (32.2 feet/second) each second it falls. FMCSA requires that cargo securement systems be capable of withstanding the forces associated with following three deceleration/accelerations, applied separately:

There are two government bodies which oversee and govern trucking operations and the handling of cargo. The above-referenced FMCSA governs the motor carrier while the truck and cargo are in transit on the public roadways. It covers all commercial vehicles with gross vehicle ratings above 10,000 pounds operating on public highways. Additionally, OSHA regulates what happens when the tractor and trailer are not traveling down the highway. It oversees the loading, pick-up, and delivery aspects of the movement of cargo. The authority of the FMCSA ends, and OSHAs begins when the truck and driver arrive at a freight pickup or delivery point.

Getting the right people involved immediately after a falling cargo case can be critical to subrogation efforts. If the loss is significant, consider getting subrogation counsel involved early. Potential experts include the following, depending on the nature of the accident:

Anticipate and be prepared to counter defenses which involve the alleged negligence of the dock work or driver’s failure to follow the proper methods for opening trailer doors. This can include violation of simple rules such as never opening both trailer doors at the same time, standing behind one door as the other is unlatched, etc. 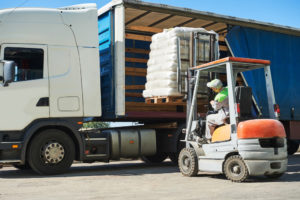 It is the motor carrier’s responsibility to make sure that the cargo doesn’t shift in such a way as to present a danger to those who open the trailer for unloading. The above-referenced experts will be able to quickly address the lack of proper load securement apparatuses such as straps or bars. Such devices normally belong to the motor carrier and may not remain in place with a delivered load. All aspects of the loading and securing of cargo must be considered when evaluating a subrogation case, including loading of the cargo by the shipper and securing and inspecting the cargo by the motor carrier’s driver. The end responsibility for safe loading and securing of cargo belongs to the driver. He or she has the responsibility to inspect the cargo and all securement devices before each trip, within the first 50 miles (often not done), when switching drivers, and at 3-hour intervals or every 150 miles, whichever occurs first (also often not done). Subrogation professionals should look for documentation that all of these things have been complied with. That said, if the trailer has been loaded, secured, and sealed, and the driver has been instructed not to open the trailer, all bets are off and the liability rests with whoever loaded the trailer. Short distance hauls are often riskier and more dangerous than long distance hauls, because those involved tend to be laxer about securing cargo if it is only being transported a mile or two.

When evaluating subrogation cases involving injuries or death from falling/shifting cargo, even if all of the above requirements are met, look deeper. Tie-downs should not contain knots, be twisted or cross over each other. Any repairs to tie-downs must be done in according with the manufacturer’s specifications. All tie-downs used to secure loads on trailers with rub rails should be located inboard of the rub rails whenever possible so that the rub rail and not the tie downs take the brunt of any rubbing. Rub rails are designed to “rub” against other objects and absorb impact. They protect the chains, straps, and ropes used to secure the cargo. However, the FMCSA decided in 2005 that removing the rub rail rule would not detract from highway safety and would make enforcement more consistent.

Companies now have to make their own decisions on the placement of the tie-downs, and this provides fertile subrogation ammunition when you have a serious injury or death involving shifting or falling cargo. Stake pockets, low-profile sliding winches, tracks designed to accept tiedown plates, and other features are available to allow rub rails to be reserved for their intended purpose — and failure to use them can be the basis for a subrogation action.